“Now is the time to proceed to the wonders of Rome, to examine what we have learned over 800 years and to show that we have conquered the world with our buildings too.”

In this exert Pliny the elder (Gaius Plinius Secundus), Roman author, naturalist, natural philosopher and also naval and army commander refines the Rome’s view on their capability of presenting their wealth of knowledge though erecting living art. Architecture has the potential to pass on political messages and the splendour, grandeur and opulence of Rome conveyed this to the known world. Pliny also acknowledged the contribution to development by the Romans was almost entirely in the field of practical application. This quote also shows patriotism in Pliny’s tone, by saying the how the knowledge of Rome they are lead the way in transforming the world’s architecture.

The ancient Romans had preferred structural design that appears in a distinctively roman monument. This leads on to the arch. The theory behind the arch was to support a broad spanning framework. Architects had used pillars and columns before for foundation, however they had sometimes been too brittle so the arch was used to replace them. The architects were not concerned with flourishing the arch an innovative new design; they were fascinated by the practicality of it and the greater amount of weight it could take. It was a step up from the Greek post-and-lintel system, where most public buildings were held by horizontal beams or lintels which are borne up by columns or posts. Through the test of time it has proved to be worthy of any mission,whether it was bearing a long bridge, or holding up a Gothic cathedral. The arch, same as many other Roman origin designs have found their way to the modern-day life for example one of the most symbolistic monuments in Paris,The Arc de Triomphe de l’Étoile. 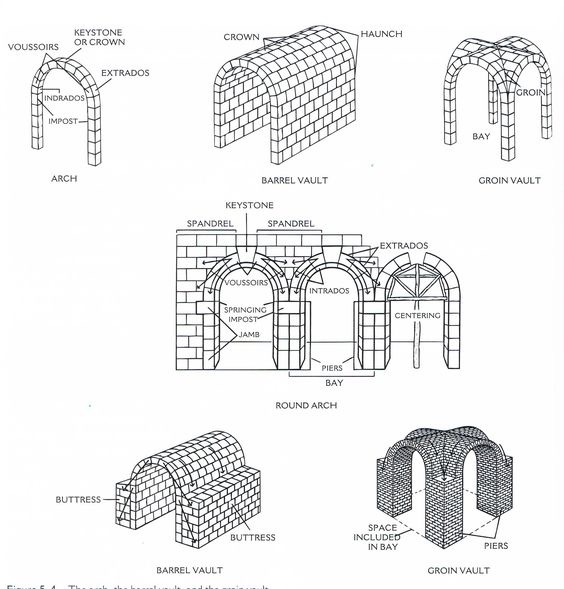 The vault, used by the Romans, predominantly, for support of ceilings, roofs of buildings, rooms and support for ceilings. Simplistically, it is a string of connected arches forming a semi-spherical structure. The simplest form is the barrel, or tunnel vault, very sustainable and was held by straight walls on the sides. Another Roman-fancied system was the groin vault, two barrel vaults meet then pass each other. Vaults were used in monuments such as the Coliseum to hide corridors and also in the public baths of Roman cities.

A third which the Romans came to the use by, was the dome. The dome, similar to the previous two, was widely used in many striking structures. One type is the spherical vault, which lied on a base wall. Compared to the vault, this was more stable; however, it was restricted because of how it thrusts outward in a circle. Roman hemispherical domes were glorious and magnificent inside and out and truly amplified the creators’ objective of presenting the beauty of roman architecture.

Great empire confers with an influential city, the British empire’s beating heart and brain was its capital, London. It was the industrious revolution who gave way to the birth of London and kick started ‘the empire on which the sun never sets’. Rome was no exception for it was the ‘pillar’ of all trade, art, commerce and court. The regal city, stood on the shores of the Tiber River, the perfect strategic location as it was not far to the coast and surrounded by seven thundering hills.

“For fortified towns the following general principles are to be observed. First comes the choice of a very healthy site. Such a site will be high, neither misty nor frosty, and in a climate neither hot nor cold, but temperate; further, without marshes in the neighbourhood. “

Vitruvius, Ch.VI sec.XVIII
The above excerpt is from De architectura (The Ten Books On Architecture) (~ 15BC) by Marcus Vitruvius Pollio, who was known as Vitruvius. He was a Roman author, architect (some say first architect), and engineer. He talks about choosing an area fit for a defensive town. The descriptions he used are very much like that of Rome, he mentioned “such a site will be high” and Rome has hills surrounding it.

Contrary to much of the minor cities of the empire, Rome had a unsystematic geography. Due to the population growth, the city elongated its boundaries by adding public works. Aqueducts and the sewer system, two of the revolutionary systems used by Romans. Aqueducts, were constructed by the Roman army, sent water to the expanding population. They were colossal edifices made of cement, the water was conducted along their. At that point in history underground sewers were an intellectual wonder. The miscellaneous sewers system camouflaged by stones, similar to modern sewers. Waste flushed from the latrines ran past a central channel into the main sewage system and thence into a nearby river or stream. Sadly for hygiene though, even with the ingenious design, throwing waste out of windows onto streets, at least to the words of Roman satirists. If the words were true it would be a ‘waste’ of ancient sophistication, that is of course by my own opinion. To me it is the beauty of history to have let people have perspective and opinion on events. As it is with most cases of ancient history occasionally there are things in which we can never fully understand. Why this is you may ask? The fact that this was thousands of years ago makes information lost and misinterpreted. With that being said, the Romans management of waste was and looked up to for its innovation. Public baths, another popular site situated all around the city. These were public buildings with huge open-air rooms. People would bathe and exercise. Even today these great vaulted roofs still lean over the ruins of the baths and stand as a great reminder of man’s early achievements.

3 thoughts on “Thoughts #4 – Going back to Roman times”