So I want to start off talking about the film “The Imitation Game”. These three words probably brings you back to the moment when you were fangirling over the actor Benedict Cumberbatch who played the role of protagonist Alan Turing. However the film not only depicts Turing as the Mathematical prodigy and war hero who was estimated to have saved the most lives in World War 2, it also demonstrated the manifestation which stemmed from his genius mind, “The Bombe”. It was the decryption device used by the British Army in Bletchley Park to crack the infamous German Enigma machine. Since warfare has less to do with physical killing but rather strategy, communications within both sides of the allies and the axis were encrypted in code.

Now, you may wonder, why does it have such a weird name? I know I did. It turns out everything happens for a reason, even seemingly insignificant naming of machines. The name was taken from an earlier attempt to break the Enigma, another Polish decryption device named “bomba kryptologiczna” or simply “The Bomba” for short, as you will be pleased to learn. The machine is seen below for simplicity, is composed of four parts. 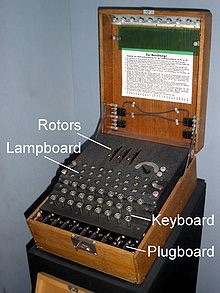 The enigma was actually not only specifically designed for military use but also used for everyday communications. However the military version has an extra plug board for added secrecy. As the machine was used all throughout the war, numerous versions were created. I will be giving a generalised overview of all the models. The three slots expose three rotors which contains various consecutively larger rotating rotors from right to left. Their circumference is divided into labeled segments usually with number or letters. Like hands on a clock the rotation of the rotor is proportional to its size. The very right rotor is the smallest and turns each time a key is pressed. Once a full turn is completed the next rotor to the left then turns one of its segment, once it’s has completed a turn the one left to it turns by one of its segments. This rotation is able to continue on until all of the numbers on the rotors appear on the slot.

The other three parts, moving from top to bottom is namely the lamp board, keyboard and plug board. These are simply three sets of alphabets. When the German troops wished to send out orders a letter key on the keyboard is pressed, similar to a typewriter. This action in generates an electric current, a number of mechanical parts such as the three rotors scrambles the path in which the current moves in. Thus lighting a different letter on the light board each time a key is pressed. Seen below:

The plug board is as the name suggests, a series wires connected to two-pronged ‘plugs’. The prongs join two letters together which allowed the machine to switch between two letter each time, it was usually set to 10 pairs from a maximum of 13. Seen below: 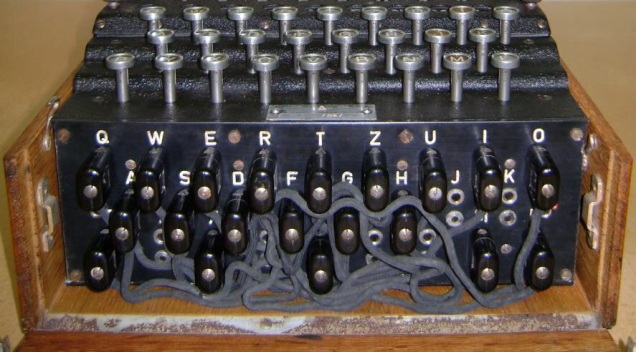 When setting up the Enigma, there are five different rotors to choose from to set up in the three slots. After choosing one for the first slot, four are left and then three are left. Each of the three rotors has all twenty-six letters of the alphabet, all of the starting positions. Apart from the starting positions, a full turn of the first rotor moves the second motor on its 27th turn as mentioned before. The second rotor then moves the third rotor on its 27th turn.

Taking all of the above into account, this gives the general formula:

From these results it is clear why increasing the number of pairs does not in fact increase the total number of possible combinations. He pinpointed the Enigma’s fatal flaw and utilised the fact a pressed letter cannot ever become itself when displayed on the light board. This leaves 25 other options to choose from. The same letter does not appear to be the same encrypted letter and so two encrypted letters cannot be the same pressed letters.
There were many possibilities which were ruled out as they were only theoretically true but not true in practice, this gives an actual combination of:

The sheer size of the combinations is why the Enigma was deemed as the ‘uncrackable’. Turing, did the impossible and with his equally intricate Bombe machine. He used maths to save lives.