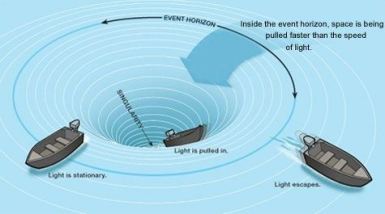 Crossing the Event Horizon of a Black Hole – the point of no return – you will soon approach the Singularity. This can be described as a single point in which all mass has collapsed down to and that the space-time curvature is infinite. Now, it’s important to note that, at the point of singularity, our current laws of physics go haywire, so rather than saying a Singularity is a single point of infinite density so on and so forth, it is more like a region of space where Physicists have no idea what they’re talking about because the Mathematics of our current theories become nonsensical when applied to this situation.

I mentioned Quantum Gravity earlier on, and it has become clear that this will help solve the singularity problem. Quantum Gravity is the unification of the two theories, General Relativity and Quantum Mechanics. General Relativity – a classical theory – is currently our best way of describing the large structures in the macroscopic world involving Gravity. Whereas Quantum Mechanics deals with the minuscule interactions between particles. A black hole singularity requires the two theories to combine as it defines particles on a very small scale but also under the influence of intense gravitational fields.

Combining Quantum and Relativity has never been easy but many breakthroughs have come about in attempting to do so, including the development of the two most hopeful candidates for the Theory of Everything: String Theory and Loop Quantum Gravity. One describes particles as one-dimensional strings, vibrating at different frequencies which give the appearances of different particles. The other describes Space-time to be discrete rather than continuous.

Another breakthrough in the search for this theory was Stephen Hawking’s work on Black Hole evaporation in the 70s where he applied Quantum Mechanics to a classical picture of a Black Hole – where by using General Relativity a Black Hole is a place where everything goes in and nothing comes out, discovering that Black Holes aren’t really black. They themselves have a temperature, so emit radiation that is characteristic of Black Body Radiation since a Black Hole is almost a perfect Black Body. Well due to Black Holes having a temperature, according to the laws of thermodynamics, they must emit radiation. The amount of radiation and the temperature of this radiation depends solely on the mass of the black hole. So larger Black Holes, the ones that are depicted at the centre of galaxies, take longer to evaporate than smaller ones, much longer than the history of our Universe. Hawking radiation may raise several questions, like why would a Black Hole radiate if not even light, which always travels at the speed of light can escape its pull? Do these particles travel faster than the speed of light? Well, they can’t because Einstein’s Special Relativity states that the speed of light is the fastest speed there is and can only be achieved by massless particles.

If you look up what Hawking Radiation is, many sources will say something along the lines of the following. The vacuum of empty space is not, in fact, empty due to the Heisenberg Uncertainty Principle in Quantum Mechanics which tells us that we can’t be clear about the momentum of a particle if we know of its position and vice versa. This means that a vacuum cannot be in the ground state all the time, there must exist random Quantum fluctuations.

By chance, these fluctuations – particle and anti-particle pairs that exist for a very brief time and then collide to annihilate each other – will appear on the Event Horizon of a Black Hole, where one with negative energy falls in and the other escapes. Because the negative energy particle fell in, it would decrease the mass of the Black Hole through the energy-mass equivalence. However, people have argued that this picture is misleading. Another explanation is the Unruh Effect which proposes relativity of vacuum emptiness. That is, in one particular reference frame inside the Black Hole, a person would perceive empty space, whereas, in another reference frame outside the Black Hole, someone else would see high energy particles. The energy of these particles come from the Black Hole’s mass leading to its eventual evaporation. This is all very complicated, and need advanced mathematics to explain properly – which sadly I’m incapable of at the moment.

There’s a major problem that appeared through this proposal of Hawking radiation which is the infamous Information Paradox, and it is something I’m not going to discuss in this post today but hopefully soon.

Susan is a 5th year high school student currently studying three STEM subjects at Scottish Higher level-Mathematics, Physics and Chemistry (Crash Course). She particularly loves ideas in cosmology and hopes to embark on an academic journey in the area of Physics.