Previously I have touched on my summer research project on tendinopathy but today I thought I would share a bit of what I have done with you all, enjoy!

The driving force behind my research was due to the fact that soft tissue disorders represent the third most common musculoskeletal condition in the UK with 18 cases per 1000. These primarily affect tendons, accounting for 30% of all rheumatological consultations with a general practitioner. Causes are multifactorial but with an ever increasing number of professional athletes and also an ageing population whose tendons decrease in elasticity; there is an annual estimated cost to the NHS of £250 million. Though molecular pathophysiology of tendinopathy remains incompletely understood key inflammatory mediators such as proinflammatory cytokines are found to play a vital role.

The extracellular matrix molecule tenascin-C is highly expressed during embryonic development, in pathological situations such as chronic inflammation, cancer. By this report it is found to be at significantly higher levels during diseased tendon tissue repair as compared to healthy tendons to carry out its role as an inflammatory mediator and induce inflammation in attempts to repair the diseased tendon. Tenascin-C prolongs inflammation at site of trauma and leads to further tendon damage. These results provide useful insight into the complex cross-regulation of inflammation and tissue remodelling mediated by tenascin-C.

Tendons are a band of flexible fibrous connective tissue which connects muscle to bone. They are present in joints and largely inelastic to conserve energy whilst transmitting the contractile movement of muscle to move bone. Despite the frequent mention of tendinopathy, tendons are in fact extremely tough it is found that collagen fibrillogenesis begins as an assembly of collagen molecules in a series of extracellular compartments, progressing through post-depositional maturation leading to thicker and longer fibrils and ending in their coalescence in the final stages of fibre production.

Tendinopathy covers a spectrum of tendon disorders which can affect all parts of the body but most frequently in the rotator cuff, elbow also in the Patella and Achilles tendon. These disorders are united by their common pain upon movement and tenderness upon palpation. Noted, clear distinction is made with the term ‘tendonitis’, simply inflammation of the tendon and ‘tendinosis’ non-inflammatory degeneration of a tendon which takes much longer to treat.

The usual cycle of repair of general tissue injury and especially upon tendon injury and is as follows: 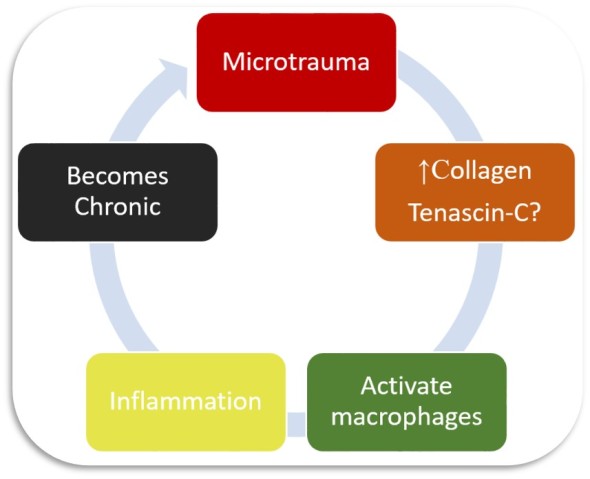 However, it is clear that this cycle is a vicious one as the micro trauma is never actually ‘cured’ as the rapid turnover of type III collagen sacrifices the quality of repair. In comparison, type I collagen neatly lays down foundations for remodelling. The maximum collagen accumulation occurs at 2-3 weeks post injury. Type III collagen predominates early (days 1-3), but is replaced by type I. Thereafter at 6 weeks 80% of final strength and 60% of original strength has been gained. At 8 weeks it reaches its max tensile strength (70-80%). Even though type I collagen does play a role in remodelling, the initial weaker foundations of type III collagen do not allow for maximum strength. The damaged tendon and even the post-reparative tendon is structurally weaker and therefore inferior to its healthy tendon counterpart.

The multimodular, extracellular, oligo metric matrix glycoprotein tenascin-C is present at different levels during the different stages of a person’s life. It is especially high during embryonic development. Tenascin-C interacts with several other extracellular matrix molecules and cell-surface receptors, thus affecting tissue architecture, tissue resilience and cell responses. Inflammation is a critical and immediate response to tissue injury and infection. Pattern recognition receptors (PRRs) recognize both pathogen- and damage-associated molecular patterns (PAMPs and DAMPs) and in response stimulate the expression of pro-inflammatory genes. The tenascin-c expression is induced at sites of inflammation, apparently regardless of the location or type of causative insult. The expression is observed upon both tissue injury, for example during incisional wounding and tendon rupture.

The laboratory has previously identified that the damage associated molecule, interleukin 33 is upregulated and released following tendon damage and is associated with subsequent collagen matrix changes. Little is known about the pathophysiological mechanisms underlying the release and signalling of damage associated molecules in tendinopathy. Tendon biopsies obtained from normal (n=5) and diseased (n=5) patients underwent immunohistochemical evaluation for the expression and localization of tenascin-C. Additionally further normal and disease tendons underwent enzymatic digestion to isolate human tenocytes. Subsequently in vitro experiments with cell culture analysed the effect on inflammatory and matrix related pathways on the addition of tenascin-C in an attempt to understand the molecular mechanisms involved in tendon damage.

That’s all folks, thanks for reading!

Author – Jiangmin Hou
Jiangmin is a 6th year high school student currently studying three STEM subjects at Scottish Advanced Higher level including Mathematics, Biology, and Chemistry. She is interested in pursuing a degree in Medicine after completion of Secondary Education.