So, if all matter can act like waves, we could argue that a, say, bullet also has a wavelength. A “de Broglie wavelength”. But, if so, why don’t we normally observe the wave properties of a bullet then? A wave passing through a gap will diffract, a bullet never diffracts after being shot through a gap. The relationship to calculate the de Broglie wavelength of a particle is the following:

If a 5g bullet was fired at 400m/s (momentum = mass x velocity), the corresponding de Broglie wavelength would be 3.32×10^-34m. A gap size could be around 5cm wide. The wavelength of the bullet is in no way comparable to the width of the gap, and therefore the particle nature of the bullet is clearly dominant here, there is no chance we’d see the wave property. 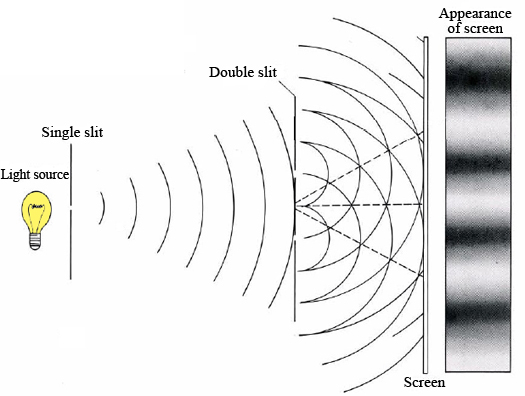 The single slit was used to focus the light from the light source and division of wave-front occurred at the double slit which allowed the light to split into two waves that are coherent (constant phase difference) because interference can only happen with coherent waves. The waves would then interfere at the screen producing bright and dark fringes. The bright fringes caused by two peaks meeting and producing a greater peak – Constructive interference. And the dark fringes caused by a peak and a trough meeting, cancelling each other out – Destructive interference. 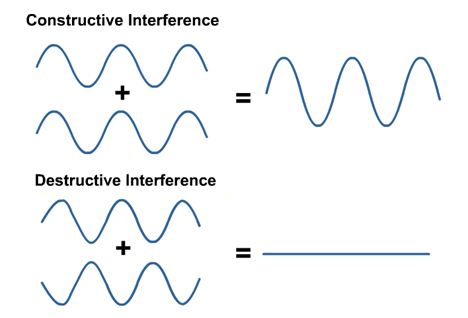 Electrons are matter particles. They’re a member of the standard model of particle physics and classed as first-generation leptons. In a sense, they are supposed to act like the bullets mentioned earlier. If we were to continuously fire a machine gun at a double slit, it would result in the formation of two bands of greatest accumulated bullet intensity straight behind the two slits.

If we do the same with waves, the result would be identical to the original light double slit experiment – central bright fringe + other bright and dark fringes on either side. Intuitively, there is no way something exhibiting particle properties would produce the bright and dark fringes, it just doesn’t make any sense…right? But who said Quantum Mechanics was going to be intuitive?

That is exactly what showed in Feynman’s thought experiment from his lectures in Physics – shooting an electron gun at a double slit and detecting a diffraction pattern. It displays both particle and wave properties of the electron in one experiment. Before the slit, it acted as a particle, after passing through the slit, it was a wave.

Indeed, this was the experiment I wanted to do. One that only has been achieved experimentally recently and can be viewed from a paper published by the Institute of Physics.

Ambitious? I thought so too. I hadn’t realised that I had dug myself a deep hole until later. Soon I found out about something called the Transmission Electron Microscope at the University of Glasgow and contacted an academic to ask about the potential to use it for my mere “high school physics report”. Then came the coolest two days of my life.

*findings will be presented in a later blog post