Hi, everyone! I’m a time-traveller and the new writer for Passion For STEM. I hope you don’t hate my writings too much. To understand the future of Computing, we must first know at least a little about the past. Let’s do some time travelling together, then.

It’s 1000 BCE and we’re in a moneylender’s place in China. We see someone asking for a loan of what is apparently a big amount (We know this because Susan is with us and translates it for us.) (Thanks, Susan.). What do we see the moneylender doing his mathematical calculations on?

It’s a weird rectangular device with lots of little beads in it. Familiar, huh?
This is currently known as The Abacus.

We’re back here. So, the Abacus was invented by the Chinese a long time (we’ll see how long when we take our next trip) before anyone even came close to inventing a device that helped humans in solving their math problems. It was a simple device with very basic operations but still could help a lot when big numbers were into consideration (like we saw at that moneylender’s).

END_OF_DOCUMENT_TOKEN_TO_BE_REPLACED

Make the Future took place again this year to showcase the science and engineering feats of the UK and world, and to generally get people excited about science. The festival is focussed on energy production, employing new techniques and idealising low-carbon techniques (with our ever-increasing current energy usage) to reduce our burning of fossil fuels. With great minds and even greater inventions, it was impossible to not think up potentially-world changing ideas.

All of the staff were extremely enthusiastic staff with bubbly personalities which complimented the beautifully sunny day. They did great jobs in assisting children from Primary and Secondary schools, which came in the thousands, to learn, explore and be inspired in the buzzing atmosphere.

Amongst the main attractions was the ‘Make The Future’ live performances, where kids flocked to as they were shot with water vapour and directly observed the magical-seeming phenomena of electromagnetism.

END_OF_DOCUMENT_TOKEN_TO_BE_REPLACED

A little update on where I am with everything at the moment. Again I am incredibly apologetic for updating less frequently recently due to a lot going on. As you might already know, I entered the Breakthrough Junior Challenge, been notified as a semifinalist, and recently crowned Regional Champion of Europe – the popular vote process definitely was more time consuming than I had imagined, but now (I hope) I can share with you some of the exciting things I’ve been wanting to write about for a while.

Firstly this post is on what I consider as THE BIGGEST DISCOVERY IN PHYSICS this year – the neutron star collision. You might already know that the 2017 Nobel Prize in Physics was awarded to the three leading physicists who were involved in a worldwide collaboration in the search for gravitational waves. The “kilonova” on August 17th was not only a detection of another gravity wave but it also unveiled so many more utterly amazing things about the cosmos we were yet to discover.

To start off let’s jump straight into the science behind the event of colliding Neutron stars. Neutron stars can be thought of as the less extreme versions of black holes – which are a result of very massive stars collapsing under their own gravitational pull and forming a point of infinite space-time curvature. These stars are the remnants of the supernovae of stars that are roughly 10 to 29 solar masses, too big to form a white dwarf (like how our own Sun will after its death) and too small to form a black hole. When a star this size explodes, its gravity is so strong that it literally forces electrons and protons to combine into neutrons, and the neutron star is stopped from further collapse by neutron degeneracy pressure. Neutron stars are extremely small and dense, their diameters are the size of cities but a teaspoon can be the weight of Mount Everest. Thus, there is no wonder how they produce immensely strong gravitational fields and not only cause gravitational lensing but also gravitational waves.

END_OF_DOCUMENT_TOKEN_TO_BE_REPLACED

I have decided to submit an entry to this year’s Breakthrough Junior Challenge, which is a competition in which you have to make a 3-minute video explaining a scientific concept/idea to a general target audience. I chose the Black Hole Information Paradox as my topic because I was reading into the Holographic Principle over the summer and fell in deep haha.

The following is my video – I hope you like it and could give it a thumbs up on Youtube if that’s a possibility.

Leave some thoughts below!

My life is a little hectic at the moment due to UCAS (University Application) deadlines and so on. While in the middle of composing my personal statement, I found a small tribute text I had written about Carl Sagan last year as a response to the following question for an application.

If you could have dinner with anyone alive or dead, who would it be and why?

And I followed up with this:

I would love to have dinner with Carl Sagan. 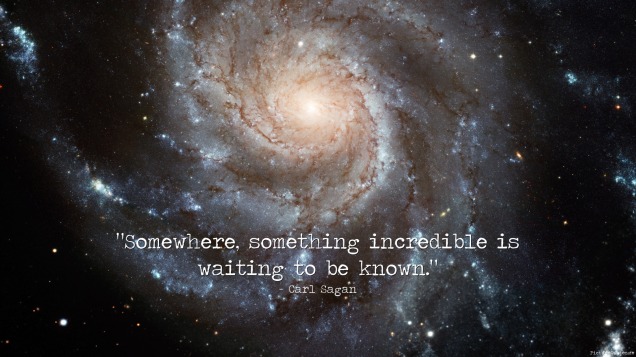 END_OF_DOCUMENT_TOKEN_TO_BE_REPLACED

One of the most important laws of Physics is perhaps one we have all heard once in a while – the second law of thermodynamics.

This law states that the entropy – in a closed system – in which we can infer as the Universe, will always increase.

A common misconception with the term entropy is that it is a measure of disorder. A “disordered” state does not necessarily mean that it has high entropy and vice versa. Entropy is rather the number of ways particles can be arranged. We can take tea and milk as an example, as many people do. Looking at the tea and milk system, at the instantaneous moment when you pour milk into tea, it is perceived to have low entropy, this is because the milk molecules are virtually sitting on top of the tea molecules. When you wait for a second or two until the milk starts to blend and dissolve into the tea, the system begins to increase in entropy, because there are so many more ways for the milk and tea molecules to arrange themselves in this sense, rather than being stacked on top of each other. END_OF_DOCUMENT_TOKEN_TO_BE_REPLACED

END_OF_DOCUMENT_TOKEN_TO_BE_REPLACED

Bonjour fellow bloggers and blog viewers, I just came back from a fantastic residential week at Scottish Space School and I just thought it would be great to share this great experience with you all.

The Scottish Space School, as I mentioned several months before in a “thoughts” post, is a residential week aimed at students in their second last year of high school who are interested in pursuing a career in Engineering, Space Exploration or something along these lines, and is situated in the University of Strathclyde, Glasgow. This year I was one of the lucky 100 students to be selected from over 500 applicants based around Scotland to attend the week running from 11th to 16th June 2017.