Make the Future took place again this year to showcase the science and engineering feats of the UK and world, and to generally get people excited about science. The festival is focussed on energy production, employing new techniques and idealising low-carbon techniques (with our ever-increasing current energy usage) to reduce our burning of fossil fuels. With great minds and even greater inventions, it was impossible to not think up potentially-world changing ideas.

All of the staff were extremely enthusiastic staff with bubbly personalities which complimented the beautifully sunny day. They did great jobs in assisting children from Primary and Secondary schools, which came in the thousands, to learn, explore and be inspired in the buzzing atmosphere.

Amongst the main attractions was the ‘Make The Future’ live performances, where kids flocked to as they were shot with water vapour and directly observed the magical-seeming phenomena of electromagnetism.

The festival ensured the physical interaction of youngsters with new concepts and ideas and did an amazing job in getting them excited about it. Excited screams along with ‘oohs’ and ‘ahhs’ could be heard walking through the various tents as they turned wheels to observe the viscosity of different fuels, moved air-blowers around to get to grips with a new invention involving the moving of kites producing electricity with sky-shattering efficiencies and ran around the insides of giant hamster balls to generate electricity. And if you were quiet enough, you could have heard the sound of the ‘thinking and innovation’ gears in their heads being spun around too.

The autonomous car developed by Oxford University was once again on display and helped explain the close link between electrical control systems and Artificial Intelligence to better conserve fuel on the roads. It was exciting to witness the driving force of the UK’s research in AI stacking up against the likes of other leading countries like Singapore and the US.

Rachel Riley, an Oxford graduate, ex-Gadget show host and strong advocator for the inclusion of women in STEM was present, getting her hands dirty and helping kids build structures in an exciting challenge. Jason Bradbury, a host on the Gadget Show and a whole plethora of many other fire-blazing, gear-spinning STEM shows also swung by, chatting to kids and appearing live on Centre Stage to give talks. Dr Shini Somara, a Mechanical Engineering graduate, Crash Course Physics host and all-round science geek, who I actually met at the Big Bang Fair, also made a few appearances. I, and many others felt that all three of these celebrities were some of the most passionate about STEM and new ideas, and were the perfect figures to aid the mass dissemination of science and engineering to youngsters. 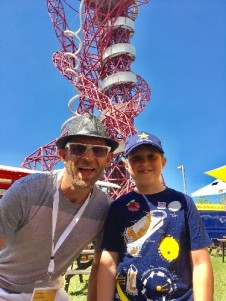 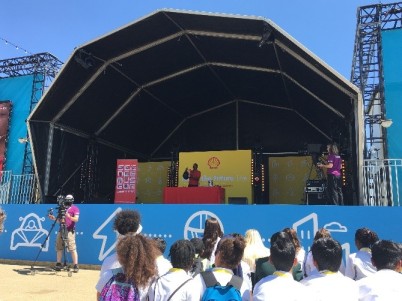 One of the most visual and definitely the largest display at the event was the Eco-Marathon, a circuit set up for the most energy efficient vehicles built by the most enthusiastic and talented university students to trawl around, running on only one litre of fuel. It was apparent that whizzing around were not only futuristic looking, well-engineered contraptions, but also were billions of technically oriented brain cells – winning was about the right combination of energy source, streamlined design, lightweight materials and driving strategy. The current record stands at 3,771 km – that’s from London to Helsinki and back!

It was hard to miss the weaving and winding madness of the cars throughout the entire venue. It will be forgiven if you may have missed it on entry to the fair due to the astonishingly minute level of sound these vehicles produce; the extremely silent electrical engine motor, charged by the solar panels, provides power for about 30 times longer than the relatively noisy petrol-powered engine. This is not to say that the vehicles were powered by the engine 100% of the time – most of the time was actually spent freewheeling as the aim of the race was to optimise for distance, not speed. As a prospective mechanical engineer, I was in deep awe.

Later on, I caught up with the team from Imperial College with whom I discussed life at the university, the team, the late nights (early mornings) working on the project and the occasional nap to make up for the late nights. It was very prevalent how passionate they were to design, build and race something that is relatively new, and to contribute to more efficient transportation for less fossil fuel-consuming world. 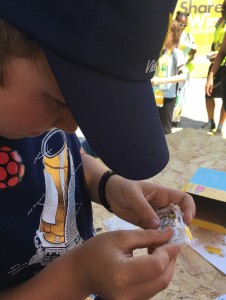 Once again came the appearance of some tiny plastic saltwater-powered cars. They worked by using the electrical energy generated by the process of electrolysis to power an electrical motor. It was excellent in showing the viability of comprising just two different thin metals, salt and water to make a battery! This activity was great in leading these kids to possibly carry out their own (safe) investigations with new energy sources in their schools or at home – to inspire. As a 17-year-old, I was at a grand age compared to the average of 11 present, so I decided to flex my muscles of technical knowledge and building skills to build a great car. Two younger kids, around 9 came up with extremely innovative methods to make their cars faster, involving one very simple trick and a more thought out one. Let it be known that I was left in the dust as they propelled not only their cars but also their minds and imagination of the next generation of technology.

I have extreme faith in the new generation of engineers and scientists in the UK and it is my only wish that they continue the trend of improving technology at an increasing rate which will inevitably Make The Future. Once again, it was another electrifying, astounding and deeply inspirational festival in the heart of London. See you next year!

Tito is a Gap year student and recently graduated from High School after studying Further Maths, Mathematics, Physics and Design & Technology at A-level. He is passionate about STEM and loves to make things in this free time. He is hoping to become a Mechanical Engineer to work on ground-breaking projects that help change the world.