Take a strip of paper, give it a half twist, and tape the ends together. Tada! You’ve got yourself a Mobius strip. A surface that is “non-orientable”, which is, simply speaking something that only ever has one side and one boundary. Travelling on the surface of a Mobius strip are just indefinite loops lasting forever thus the relation between it and the concept of infinity.

So, what does orientability mean? An intuitive way to get a gist of the meaning of orientability is perhaps to use a hollow cylinder, or a sphere, or an ordinary sheet of paper even. The outward direction of the cylinder would be in the direction pointing out of the outer surface of the cylinder and vice versa. A cylinder is orientable, meaning that you have the choice of outwards and inwards, with clear distinctions between the two. The one-sided nature of the Mobius strip makes it impossible to point out a clear inwards and outwards, the outwards direction to begin with, as you travel across the surface, would then interchange with the other direction.

We could compare topological representations of a cylinder and a Mobius strip. Below are little diagrams which give directions on the formation of these surfaces by twisting and bending it so that the two arrows are next to each other and point in the same direction. A simple repositioning of the arrows on this diagram could change the orientability of a surface. 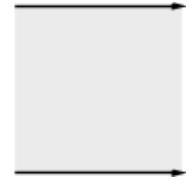 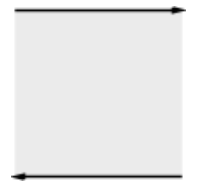 Turns out, two Mobius strips can be joined together in interesting ways to make form surfaces with zero boundaries such as the torus – the familiar everyday doughnut shape, and the Klein bottle, a weirdly awesome surface that can’t, in fact, be accurately depicted in 3-dimensional space.

These surfaces can also be represented in the same way by putting arrows on the other two sides of the square. 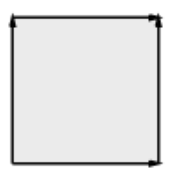 Susan is a 6th year high school student currently studying three STEM subjects at Scottish Advanced Higher level – Mathematics, Physics and Chemistry. She particularly loves ideas in Quantum Mechanics and Relativity, and hopes to embark on an academic journey in the area of Theoretical Physics.